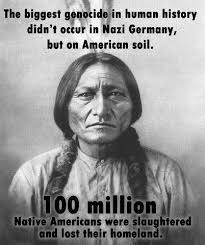 There is no excuse for mass killings or genocide by politically controlled nations. That goes without saying, but all countries have at some time in their history committed genocide. Indeed from the beginning of time humans have killed each other usually for economic gain (or possibly survival). We are therefore no different in many ways to the animal kingdom but clearly where we should be.


A great deal would change if nations had ‘real’ empathy with each other, but where political and corporate corruption change this mind-set to one of personal economic gain. Once this has happened (and it has to all nations), if people get in the way it appears that they are eliminated.


Indeed when we look at the world’s history of genocide we see that western nations are as bad as all others. For one, the has the greatest crime against humanity when the Europeans took over . According to historical data it all started with and the Pilgrim Fathers, and where the Indian tribes apparently greeted their new so-called friends from another world with open arms and heartfelt greetings. Little did they know that these new comers would eventually kill them. Therefore who were the savages, the Indians or the Europeans? But what happened in the is a little known story as the Europeans took over this northern continent. Indeed because the new European's economic interests predominated over everything, there is documented evidence that they exterminated between 50 million and 100 million native Indians (not necessarily savages either but peace abiding tribes and where the Indian wars only emerged because of the excesses of the new colonizing Europeans as they went further into the interior). To put these figures into perspective Hitler only murdered 11 million citizens. (and completely separate to military deaths)  in the Holocaust (5 million of them of Jewish descendancy). Therefore the Europeans taking over what we now know as the , terminated the lives some 5 to 9 times that of the Nazi persecution. A similar thing happened in South and central America with the Spanish conquest in their quest for riches and global power.


Therefore although western leaders have definitely to take to task the Sri Lankan regime and stop these crimes against humanity, our own history is steeped in genocide also (including slavery on a global scale). Regrettable but definitely historical fact.


Therefore my summation of the problem of genocide is that at its roots there is economic and financial exploitation for the very few, politicians included – very much like today and where things have not really changed that much. Therefore not until a new breed of politicians and corporate leaders have persuasions that put people's lives above economic and political gains, genocide will unfortunately continue infinitum I am afraid to say. That is why people like Ed Snowden have to show their face and expose as much behind closed doors decisions that they can, both in government and big business (as the two are inextricably bound together). Indeed the new EU-USA trade pact again favours corporations and gives big corporations power over sovereign states where if they do not achieve a certain profit margin, they can sue our national governments for the difference and get it. How mad is this, but it does show the immense power of corporates over national governments. Indeed according to Forbes a mere 2,000 corporates last year controlled 51% of all the global economic turnover in nominal terms or 51% of the total economic cake. The EU-USA agreement will give them even more power to extort more money out of the people of Europe and the .


Therefore genocide has its fundamental base in economic greed and the reason why it will never cease.


References:
How the TTP (Trans Pacific Partnership) will wreak havoc on future America and its people - 'This is what corporatocracy looks like!: Trading US Democracy for Corporate Profits with TPP' - http://www.opednews.com/articles/This-is-what-corporatocrac-by-Dave-Lindorff-Corporate-Corruption-Crime_Corporate-Rule_Corporatocracy_Democracy-150215-572.html